All fans in the K-Pop world can talk about is the Pandora’s Box of Koreaboo cringe that UK’s First K-Pop Group ‘KAACHI’ unleashed upon the world.

‘KAACHI,’ whose name is a play off of the word 같이 which means togetherness in Korean, debuted their MV “Your Turn” on April 28th, 2020 and it has already garnered 2.1 million views in just 5 days! Granted, there are absolutely mixed reviews, the girls definitely reeled in some buzz. Before reading this piece in your best quarantine outfit with your favorite snacky-poo, watch the MV and think about whether you want to finish your meal or throw it at the wall in frustration.

The song is, from the get-go, hot mess city. Like… I want to vote the producer as Mayor of hot mess city and these girls the golden key holding ambassadors. Now, let me make my thoughts clear before I review this – I do not hate them individually or the group. As a professional writer and someone who has filmed and made an MV, I am reviewing this with artistic criticism in mind. Hashtag – time for my shameless plug! 😀

That promotion aside, let’s break down this OP:ED in a few ways: First, cross-referencing the public response alongside my own. Second, a review of the MV, dance, and song overall. Last but not least, addressing the idea of more and more of these mixed/foreign-based K-Pop groups debuting and how it is effecting the K-Pop community. Most importantly, knowing what you all think and having a healthy discussion in the comments below! So, shall we begin?

As expected, fans were hating this video and the group ‘KAACHI’ from the beginning. Maybe their name was too gimmicky or perhaps just the idea of another group of people who are not Korean taking K-Pop’s precious sound and style to make it their own and washing it down is just getting tiresome. Whatever the case may be, the fear of backlash was enough for ‘KAACHI’ to disable comments and reactions on their YouTube video. Yet, the forums on sites such as allkpop are still buzzing (see below). 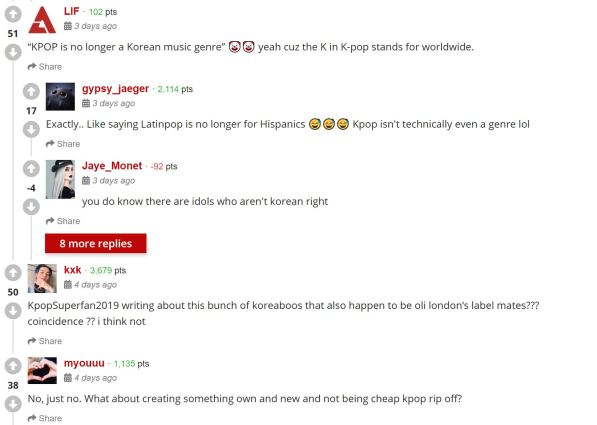 I can agree with the comments to some extent. Fans were shocked to see the agency is allegedly the same as Oli London (who also claims to be a K-Pop artist). Which, let’s face it, people like Oli are tarnishing the name of artists as they all seem to be making the term misconstrued to their own benefit for instant fame. Artists are content creators who produce things – not someone whose surgery habits lead to worldwide interest. In the end, I am happy and flattered to see another group of people showing their genuine love and interest in K-Pop through this art form. Yet, if they want to be taken seriously, KAACHI needs to rethink a lot as to avoid being a wannabe pandering gimmick.

Fans commented on how Oli’s agency and others like this are poorly managed and doing anything for quick attention. Forums even stated how the agency tried to pass off the Asian member as being Korea although she is Filipino (this is simply based on comments alone so take it with a grain of salt). Fans also mention the one Asian member had no Korean lines – but the group as a whole should be singing in Korean if they are a K-Pop group, no exceptions. In the end, KAACHI is mostly seeing more dislike than welcoming arms and I can see why.

In regards to the review, let us mention the most credible thing these girls brought to the table – Choreography. Dance wise, it was decently executed. Clean, sharp and synchronized. Unfortunately, the choreography is lacking any sort of refreshing element or at least a signature/unique dance move that is desirable or easy to imitate by the public. It can remind anyone watching this video of any YouTube cover group that can be praised for dancing on point and in sync (despite some girls lacking any facial expressions that fit the scene or lyrics). Maybe they need more practice with that popular K-Pop dance game CHOOM CHOOM!

The song is not catchy in any way shape or form. I was pleased to hear they at least added some Korean lyrics unlike girl group Z-Girls who claimed to be a new revolutionary K-Pop girl group and didn’t speak Korean at all (Like… for real? -_-). Although, their Korean alongside their English sounded like incoherent gibberish. I was shocked I could barely even make out the first few lines. The bridge building up to the chorus had slight potential but completely fell like a sack of potatoes in a river once the chorus actually hit my ears.

The lyrics portray a classic girl power anthem of getting over boys with a bit of edge but the way the lyrics are presented and being sang completely derail you from the message. The pitch is too high and off… which completely means if they EVER somehow performed this song live it would be an even bigger mess than this audio track. Vocals seem strained and tinny, making it an overall noisy song alongside the decent instrumental. The rapper has no sense of flow (they at least got that part of a K-Pop girl group right) and doesn’t transition in well. The chorus may grow on people do to the funk in the instrumental but only after 5-6 listens – if possible.

Visually (and this means members and MV cinematography included), the group was nothing to look twice at. The camera quality was at least decent but in that horrible middle of better than an iPhone less than a real camera. Location is always important, and they lacked any sort of set or props the projected the K-Pop feel. Even with GOTOE randomly included in it (why?). The flashy effects at least added something fun and made the MV quirky enough. However, their leap towards being a K-Pop idol group simply did not make it anywhere near the starting line collectively.

In the end, I have to send these girls back to the drawing board… or at least YG’s K-Pop Basement for 5 years of intense grueling training. I praise the girls for entering the scene with strong confidence and the overall notion they began with. However, from an honest critic’s POV, they are not ready. They do not really present a believable K-Pop essence and need to rethink a lot of conceptual changes alongside some training if they even anticipate having a comeback under the title of a K-Pop group.

I enjoy covering dances just as much as the next fan and think the creation of these groups come from endearing places. I never tried entering the industry or claiming the K-Pop title as my own, so my question for readers is what defines K-Pop to you? There is definitely a different intention and feeling when you hear someone say they are an actual K-Pop group rather than a cover group. But what defines someone as being in a K-Pop group? What is the standard and what can cement it as official? Do you need to be under a label such as JYP or Big Hit?

The experimental group from Columbia University EXP Edition, who has come a long way, is just another fine example of a group that is even living and promoting in Korea while studying the Korean language and still see little to no interest from the public alongside the heavy amounts of backlash they received from debut to each new release. While these people (I wouldn’t say group in KAACHI’s case) may be pioneers for the future of a world where K-Pop can be produced and practiced by anyone, isn’t it taking away the K in Korean and making it just Pop with an influence?

To sum this all up briefly, groups like these can really strip away the essence of K-Pop and make it feel more gimmicky or commercialized more than it already is. K-Pop has a formula and if it were well-known, we’d all be stars by now. I’m not saying different ethnicities can’t be in K-Pop (just look at Cosmic Girls and how the non-Asian producer Melanie Fontana writes half your favorite BTS bops), but you need to deliver. If you can reach a level where you’re singing in Korean or at least performing on Korean TV shows and stages like Alex Reid did, the title cannot be easily claimed with a meager YouTube video.

What did you all think of the ‘KAACHI’ – hit or miss? Don’t forget to share this review with your friends and get a healthy, opinionated discussion started down below. Heck, start your own K-Pop band and get some practice in with CHOOM CHOOM before your debut!