We all sat with great anticipation over the news of IU and BTS’ Suga’s collaboration. Now, it is finally here and fans are being hit with a surge of emotions not only because of the heart-warming melody but also due to the emotional lyrics.

The song ‘Eight’ was released on May 6th and was fully produced and features BTS rapper Suga while being mostly sung and written in entirety by the nation’s little sister and veteran idol, IU. With the MV accumulating over 2.5 million views in just 2 days, it is safe to say that fans are completely in love with this song.

The song title “Eight” could be taken as a metaphor to the major phases or memories IU goes through not only in her life but in the MV as well. However, it was revealed that it mainly represents the age of the two artists. IU already released a song called “Twenty-three” which discusses her many emotions of evolution and coming of age during that time period. Now, she is going through more changes as she gets older and quoted herself as being “lethargic and dreaming of a place where we felt freedom.”

The song itself is a very nostalgic and clean one with a vibrant melody, free of loud noises, altered tempos, and overwhelming sounding instrumentals. The playful strumming of the acoustic guitar pairing alongside IU’s ethereal voice makes for another easy listen. The track effortlessly mimics the popular trend of indie-pop rock songs sweeping over Korea with groups like Bolbalggan 4 and AKMU.

The song has an odd effect of carrying the listener away and keeping them entrapped in the cheery tune. Rapper Suga also brings a more masculine charm to the delicate song as his rap, which transitions in nicely, adds flavor and spice to the meaningful lyrics – like a strength behind the meaning. Despite the lyrics coming from a sorrowful place of desiring a happiness one can only recall on, the song musters up a feeling of warmth and comfort – which I think fulfills the goals of the two singers overall.

The lyrics describe a trip to an “Island under and Orange Sun” where people can go to “take a trip down memory lane” after the feel they have “lost everything else.” In this story-like song, people revisit their precious memories and dance together. The hardships seem to melt away as one can only dance without the worries of trivial things and can seemingly only discuss happier times while making many newer ones. “Forever Young” is easily the song’s follow-up chorus that creates the impact of their desired message. As IU and Suga coo “Forever Young – woo woo woo” one can feel that age is just a man-made thing and that memories are what truly keep us alive and well.

There are many ways this message can be interpreted but I feel it easily represents memories as a fountain of youth. A dream we can go back to and relive consciously and enjoy over and over again as if time has never passed. Although I think the two produce the song nicely, I wondered how it would have sounded if IU opted for a singer who could add a more ballad-like charm to the song with a complimentary, angelic-like male voice (similar to Suzi and EXO Baekhyun’s collab.) Guess they wanted something more unexpected?

The MV was quite animated in both the literal and figurative sense as it shows IU laying down in a futuristic bed that teleports her deep into her animated self-consciousness. Showcasing various caricature and art styles of the idol, IU runs through the surrounding forests, leaps off the peeks of the mountains and dives into the never-ending skies. Viewers felt these settings were representative of entrapped emotions, overwhelming desires for freedom, and even a nod to unconventional means of escaping through suicide.

The MV has fans speculating that it is an effort and supposed nod to not only suicide awareness in Korea but to the passing of some idols who recently had their Instagram pages memorialized. Fans expressed how the song was initially enjoyable and heartwarming just from the melody alone. However, after releasing the lyric translations, the song hit them quite differently. 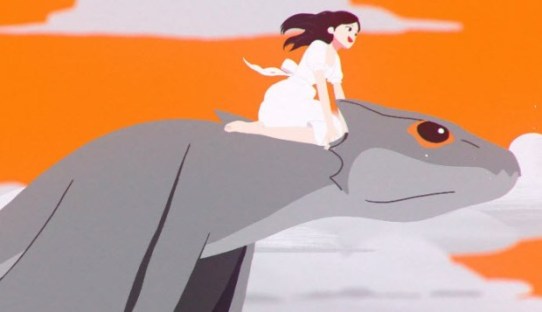 Fans couldn’t help but feel the song was about the idols missing people close to them and that going to this Island is the place they will be – awaiting them with open arms and those happier memories. A top comment on YouTube (see in the photo below) also pinpoints small facts that lead to these ideas. After viewing the MV and comparing the lyrics alongside the story, the message couldn’t be more clear.

Again, IU delivers another sophisticated and touching song. The animated MV was quite unexpected but does not tarnish the overall quality. The variated jumps between a gloomy, plain reality and the colorful and expressive animated adventures painted a very vivid picture. Alongside IU’s innocent nature, it makes for a wonderful MV to watch time and time again and captures that famous Disney magic many people admire within these sorts of animations.

The song has already become a chart-topping sensation and IU’s voice continues to be one the K-Pop scene will never be tired off. Although the song is rather simple and easy for my tastes, it is enjoyable nonetheless. The addition of working alongside the never-ending trending force that is BTS also makes for a wonderful collaboration piece to go down in K-Pop history. With these statements in mind, I can easily score this song highly.

What did you think of the song? Is it blowing you away with emotions or is it another song that is too simple to catch your attention? Share your thoughts in the comments below and do not forget to share with your friends ~