After finishing up Asia’s biggest Virtual Concert, which was a massive online event featuring an all-Asian lineup by Joy Ruckus Club, one of the most recognizable headliners K-Pop star Kevin Woo took the time to Zoom with us and share his thoughts on not only the concert but also his future endeavors!

Kevin Woo is a man of many talents. From releasing unique ASMR dance covers on YouTube and hosting virtual fan-meetings to exploring the fashion industry and being featured in forward-thinking make-up spreads and magazines – Kevin is doing it all! Although COVID has been taking a toll on many, Kevin remains creative, endlessly works to give joy to his fans, and has some fun thoughts he would like to share in the interview below.

To the fans that submitted questions, thank you! Now, let’s get to know Kevin Woo, solo artist and former member of the popular K-Pop boyband U-KISS.

Kevin has been exploring the world of music as a solo artist for two years now since his U-KISS days. The biggest question on our minds was how Kevin felt about his current status and independence. 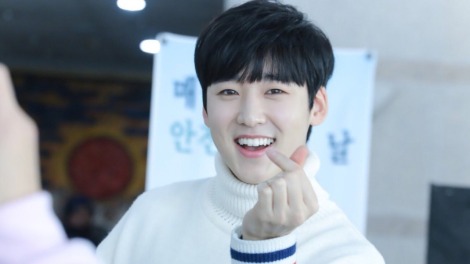 “So, I am still getting used to being a solo artist. I’m enjoying all my experiences as a solo artist. One of the best parts is having complete control over my creative input, visuals, and branding.”

When asked about his dancing and the styles he would like to produce, Kevin shared, “Dancing was always a big part of my career. So I can see myself continuing to do upbeat dance tracks. I always love feel-good dance tracks and I want to give enlightenment to my listeners.”

Kevin is also quite active on YouTube when it comes to dancing. “I thought EXO’s “Love Shot” is a very sexy dance and I want to show a different side that fans don’t get to see. I like being involved in current trends.”

If you hadn’t watched it yet, the video featured a unique idea of introducing ASMR into the mix. “The ASMR was suggested by a friend who loves K-pop and he mentioned those videos people watch on YouTube where you can hear the dancer’s footsteps!”

Providing such joy to fans is second nature to Kevin as he is capable of producing his music in English, Korean, and Japanese. With this ability, he can truly connect and share his emotions with all listeners. When asked about his English songs Kevin stated, “I focus on releasing music in English (and other languages) because I have many international fans. It’s very liberating because I get to choose where I perform and how I perform it. All the interactions, stage sets, song choices, and performance ideas I come up with are solely my planning. Everything fans experience is very genuine. Everything is 100% Kevin Woo.”

For those who do not know, Kevin Woo had countless activities in Japan and was there for about two years. He even released two mini-albums and had a tour. His song “FREEDOM” is one of his notable Japanese releases.

Kevin even visited his home state in California, USA where he filmed his music video “Ride Along” and was also a special guest on ‘Good Day LA.’  Kevin held a tour with James Lee in the summer of 2019 and expressed it was a memorable and fun time with James as well. (Curious about James? Check out some articles about him here!)

The Joy Ruckus Club concert is definitely a defining moment for Kevin’s music career as he helped lead the representation of Asian artists alongside Eric Nam and Luna of f(x). “I was very honored and glad to be a part of such a great music festival, and we are all Asian (or Asian American) and it was great to come together as one community and support this movement. It is important to support one another while getting our names out there – there were over 50 artists, and it gathered a huge crowd. If it were in-person we wouldn’t be able to have that kind of powerful reach in person so it’s a big benefit and advantage to perform virtually.”

When Kevin was asked to discuss more of his thoughts after working alongside Kublai Kwon and the Joy Ruckus Club, Kevin mentioned, “I wanted to support this music festival because when I was growing up in the USA there was a lack of Asian representation so I feel like I was a pioneer for Asians coming from abroad.”

While reflecting on our backgrounds and upbringing, Kevin shared his feelings on the matter. “I grew up in a Korean household and I wanted to spread the message that it is important to embrace your culture. We have to be proud of ourselves. We are all passionate and hard-working artists striving to pursue our craft and I’m glad to see the acceptance of more diversity of people all around the world.” Thanks to Joy Ruckus Club, Kevin and the 50 other headlines were able to successfully fulfill this dream.

Kevin mentioned that “Ride Along” was a great start to his solo-debut alongside James Lee’s “Falling,” and DJ Duo Hollaphonic’s “Over You.”

But Kevin admitted that while he is creating more music he is still in the learning process. “I had a lot of producers help me express myself with my writing. I found a new passion for my music. I usually think in English, so I write in English. There would be more phrases that I can express in English but now I can navigate my way into writing lyrics both in Korean and English.”

Putting all of Kevin’s special abilities to the side, I wanted to talk about more of the fun and unexpected surprises he had for fans – such as his recent reunion stage with U-KISS Soohyun and performance with TEEN TOP.

“I was so overwhelmed by all the attention our past songs have received in Korea alongside other artists like Rain, T-ARA, and TEEN TOP. Soohyun reached out and asked me about doing a reunion stage. We wanted to perform “Shut Up” as well and thanks to the show ‘문명특급 MMTG’ we collaborated with TEEN TOP as ‘TEEN KISS.’ There was so much hype around this performance. It felt like I was in a time machine. The show really brought us together.”

Despite all the hype coming from these performances, so many shows are completely restricted to being online now. I wondered if Kevin believed it had become a burden and underwhelming for fans or worth experiencing?

Kevin puts it simply, saying, “To be 100% honest, it doesn’t beat the real deal of seeing your artists in person and the experience of sharing the stage with fans. I think Livestreams will stick with us even after the pandemic dies down. There is something about seeing your favorite artists on your screen and being able to see them live from wherever you are. These are the perks. Engagement is quite hard but there are comment sections and creative ways to interact.”

Since Kevin is at home or often preparing in the studio alone, I had to ask the most important question of all -What is a makeup item you cannot live without?

If you haven’t already, check out his ‘LookBook’ posts on YouTube as well! It seems Kevin is a big Bobbi Brown fan due to the fact that the colors and styles also appeal to men and aren’t exaggerated.

Kevin is happy to see the progressive changes in men’s beauty he has been seeing in the industry. “I did an article for Allure Magazine about males being more open to makeup and how it’s changed over the years- especially makeup in K-Pop. It was always such a big factor for not only girl groups but also boy groups. I sometimes wear make-up in everyday life. It gives me more confidence and I’m not shy about wearing it in public.”

In the end, Kevin is just like us – a fan of K-Pop, a lover of K-beauty, and someone who pioneers the industry as an idol who can be relatable. When asked what Kevin is up to these days, from big projects to little things like his favorite recent song, Kevin shared the following.

As for his new desires, Kevin revealed “I want to start acting. I also have a big interest in fashion. I was featured in many magazines and work with brands like LIPHOP. I’m working on a fashion project but that is a secret which will be revealed soon.”

Last but most importantly – the fan questions. Most were curious about Kevin’s activities such as with ‘After School Club.’ “I miss it a lot and we all still keep in touch and it was great because I got to meet so many idols and there are a lot of idols I became close with. ‘After School Club’ helped me gain more experience in MC-ing which helped me at KCON. They are like family to me and I still go on specials and do guest hosting.”

Finally, if Kevin could choose any artist to collaborate with, he picked Day6’s Jay. Jay and Kevin are close friends so maybe we can expect to see something in the future!

As for Kevin’s final words and updates, he shared a very important event he wouldn’t want any fan to miss. “I am holding a live online fan meeting for my birthday, November 22nd! It is for international fans – it will be on stage and a full production. There will be events and game corners too. Fans can also buy a bonus ticket to win a chance to do a 1:1 video chat with me after the show.”

So, do not forget to mark your calendars and tune into Kevin’s very personal and highly-anticipated virtual birthday party fan meeting. I’m sure he will share something exciting with you on that day just like he did in this interview!

Thanks again to Joy Ruckus Club and Kevin Woo for the time and wonderful conversation! Oh, and yes – Kevin Woo’s voice is quite dreamy over Zoom so definitely buy that bonus ticket for a chance to chat with him, too!