Foreigners beware, you’re in for a deportation scare! As people plan to make their rounds at all the trendy spots this Halloween, Korean police are doing the same as a new law has been issued that put foreigners at risk of deportation.

With the Coronavirus variants still causing issues in Korea, the government continues to push their vaccination rallies and enforce the maintenance of the strict restrictions governing businesses and our social lives. However, foreigners are feeling targeted and attacked yet again as Korea has issued a new policy regarding this year’s Halloween festivities.

Starting from Wednesday, October 27th until November 2nd, police will be making rounds across Hongdae, Itaewon. and Gangnam to ensure the restriction policies are being followed by both businesses, patrons, and particularly foreigners. Although the consequences regarding business and Koreans are unknown and unstated, foreigners in particular will be forced to leave the country if caught breaking any of the Coronavirus rules such as being seen without a mask, breaking curfews, meeting in large gatherings without proof of vaccination, and failing to check into facilities alongside hand sanitizing and a temperature check.

The new and active amendment gets worse as the ads themselves (see the images below) display images of foreigners and is seemingly an attack on the foreign residents of Korea who are commonly scapegoated or blamed for the spread of the virus. 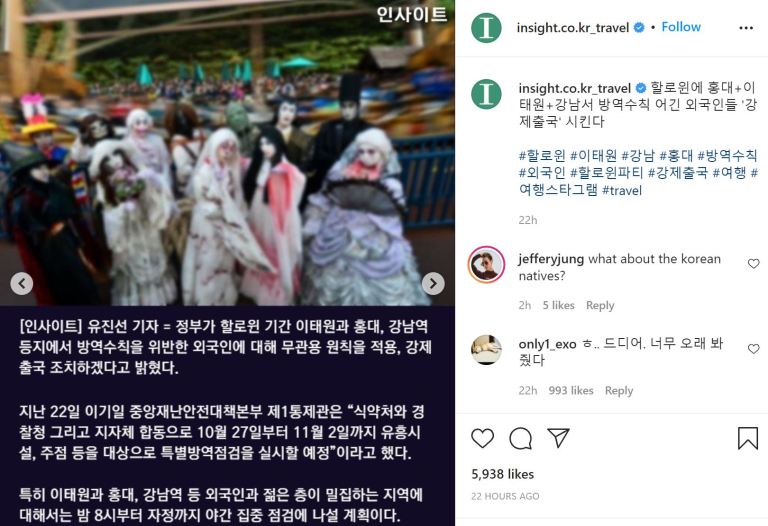 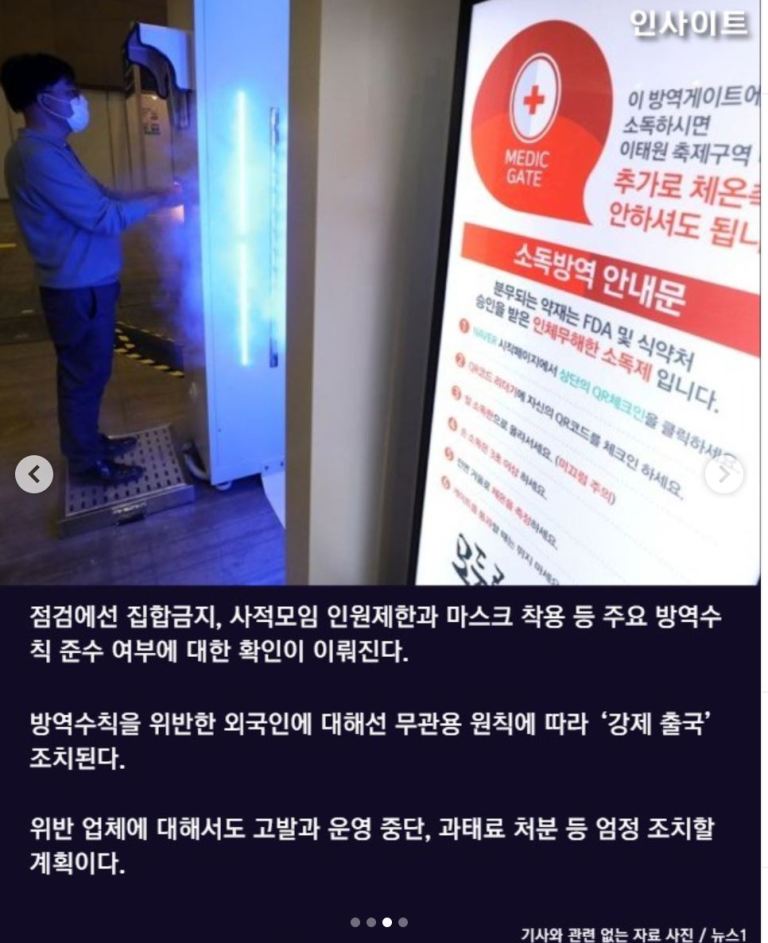 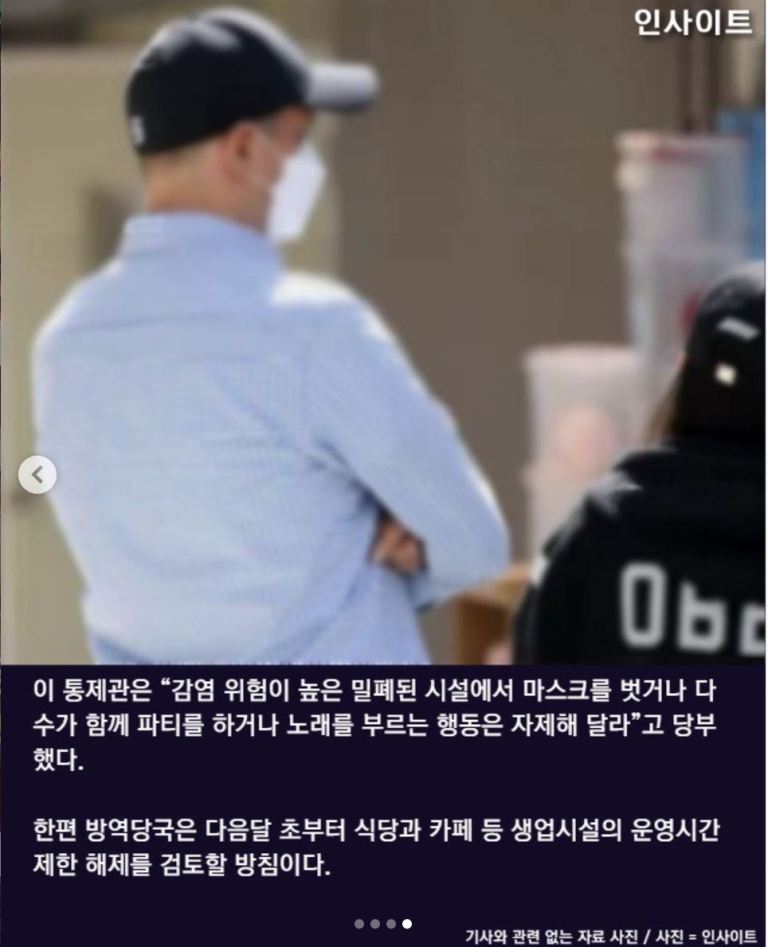 The only instance where Koreans turned on themselves was when a Korean person in Itaewon was found to have spread the virus among numerous clubs in the well-known gay district ‘Homo Hill.’ The gay community was harshly blamed and attacked for this issue despite the person spreading the virus himself being said to be a straight person (not identifying as LGBTQIA+).

Despite these policies taking into effect tomorrow, no English-translated articles or written sources have yet to be found regarding this rule and foreigners worried if this was a quick plan of action executed by the government to remove foreigners from the country. The Instagram post, which is spreading amongst foreigners, translates as such:

“The Korean government announced that it would apply a zero-tolerance principle to foreigners who violate quarantine rules in Itaewon, Hongdae, and Gangnam areas during Halloween. Foreigners will be forced to leave the country. On October 22nd,  Lee Ki-il, the first controller of the Central Disaster and Safety Countermeasures Headquarters stated, ‘We will jointly conduct special quarantine branches for entertainment facilities and bars starting from Oct. 27th – Nov. 2nd. The deployed groups will conduct intensive nightly inspections starting from 8 p.m until midnight where many young people and foreigners are concentrated and expected to gather.’

Inspectors will confirm whether major quarantine rules such as banned gatherings, limitations on private gatherings, and wearing masks are being observed by guests. Foreigners who violate the quarantine rules will be forced to leave the country in accordance with the zero-tolerance principle. We will also plan to take strict measures against violating companies, accusations and suspend facility operations through the disposition of fines.

Please refrain from taking off your mask, partying together, or singing in an enclosed facility which can cause a high risk of infections as we consider lifting the restrictions on restaurants, cafes, and other facilities going into next month.”

While the policy was made in an effort to prevent the spread of Coronavirus and to protect citizens of Korea, it is quite clear that discrimination against foreigners is still blatantly running ramped amongst the government and Korean citizens as well. Below the popular Instagram post, many ignorant comments are visible with Koreans cheering on or showing agreement with the new regulation. “It should be that way,” “Make them leave and never come back,” “Finally, this should’ve happened ages ago…,” “They shouldn’t even be allowed at the entrance of our country,” and “Finally something right is happening, we shouldn’t cut them any slack!” These are just some of the many disgusting comments that can be found underneath the post. It seems the Korean government is looking for something (or someone) to blame if the upcoming month’s lessened restrictions fall through and result in a larger outbreak than the Chuseok holiday. Many foreigners are left baffled and wondering what will happen to the COUNTLESS amounts of Koreans who break the laws on a regular basis.

During Chuseok, the numbers reached an all-time high in Korea as the case numbers raised above 3,000 and many Koreans were caught breaking the rules and going to vacations homes for parties. While the government even created new amendments for Koreans to enjoy Chuseok at that time, it is ironic to see that this holiday is met with tighter restrictions and life-ruining consequences. Living in Korea, it is common to still see many young and old Korean people alike riding buses with their masks off, sitting in cafes with over 8 people chatting without masks, food, or beverages, and roaming the streets late at night drunk without masks and entering axis or waiting for trains. But a slap-on-the-wrist kind of penalty is what can be expected instead.

In the end, it seems better to leave your Halloween plans at the door and party at home. Sadly, another year of mischief will be lost to the virus, but next year you can have your candy and eat it too. What do you think of the clearly discriminatory laws against foreigners in Korea? Will you be staying home this Halloween or ready to go out in your Squid Game costume with a picket sign? Share your thoughts in the comments below.