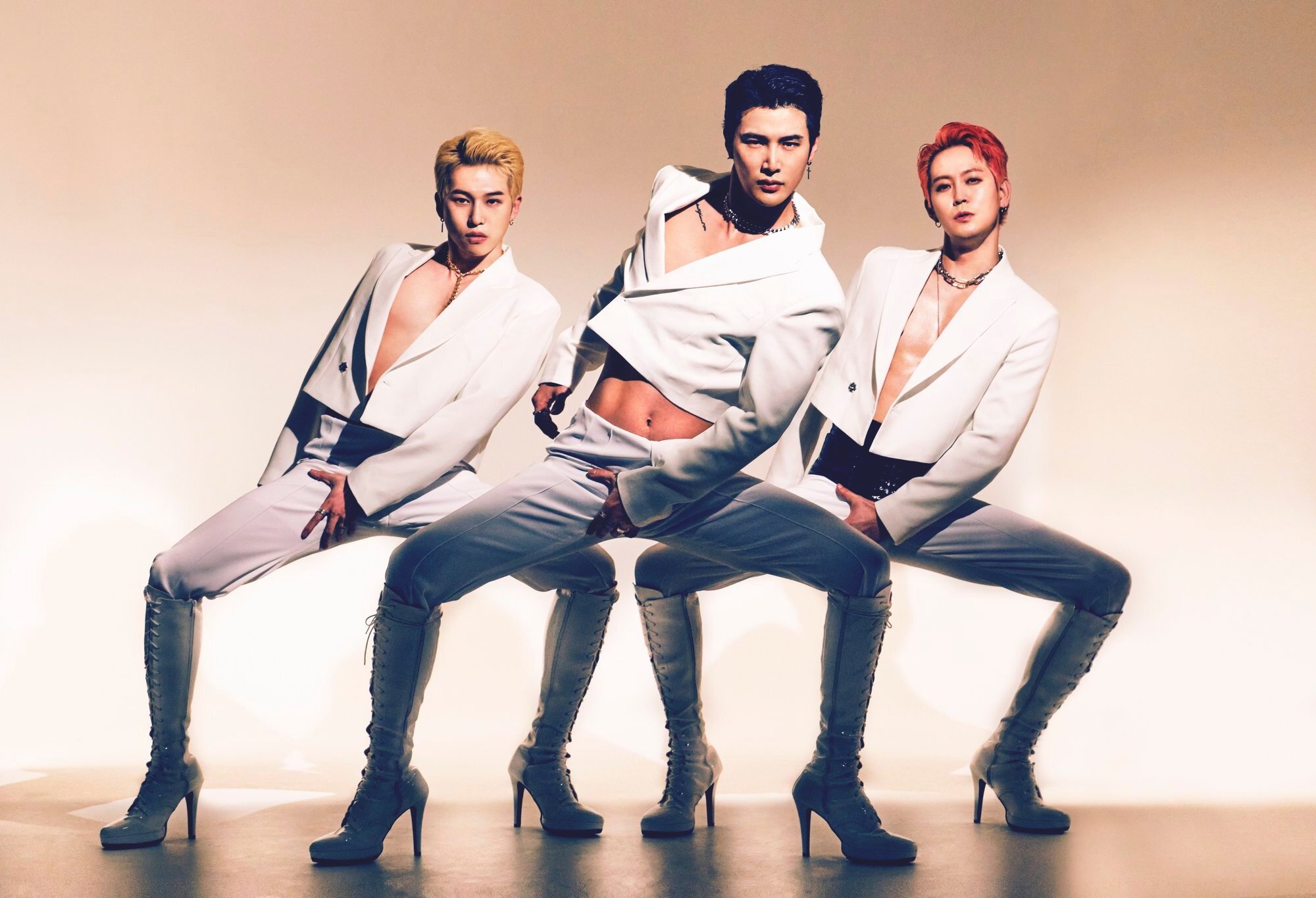 The boy group N.O.M (short for Nature of Man) made waves back in September of 2013 with the debut of their song “A GUYS,” an electronic, EDM dance track which featured 4 members with a shocking concept. Sporting over-the-top accessories, sexy high heels, eye-catchingly form-fitting leather pants, and being scantily clad in their MV, the K-Pop studs raised a few brows of viewers everywhere. Whether deemed “gay,” “too much” or “just right,” everyone was watching N.O.M and wondering how this kind of scandalous boy group would survive. Heads up – they are still thriving! Check their debut MV “A GUYS” below and get a taste of their brand before checking out their new track.

Soon after their debut, the boys were flooded with both praise and criticism as their concept was overtly homosexual. International fans from the West were mostly supportive and in favor of this open change while others felt the group was pushing things to a new extreme. The song gained popularity not only for its partial nudity but also due to the misheard lyrics due to the main vocalist’s pronunciation – such as “sexy rack” (a slang for a woman’s chest) instead of “legs.”

However, the group did take a break for sometime after their debut (I’m talking years, here) and even had a member change resulting in the final three – J.K, KOM and B-SIDE. The boys had surprised many with a comeback “I’m not but,” where they even performed on hit music programs in Korea such as Mnet’s MCOUNTDOWN in 2020 and last year.

To the surprise of many, even during these on-stage performances, the three members were seen sporting some leather outfits, interesting armor-like equipment, and iconic high heels as they dance and strut their stuff to their signature EDM style song. The group continued to garner more and more international fans, starting with a huge following in Latin America where they even held their first online fan-meeting via Zoom in February of 2021.

After that, the boys continued to show just how much popularity and support they were gaining from their efforts. Following the trends and continuing to push the limits even further, the boys set out on a fun summer adventure and their last comeback “Mega Punch” offered a totally retro vibe that is flooded with nostalgia from the early 90s! The group mentioned they were fans of the disco genre and old-school music, so it is no surprise that the boys were able to execute the concept effortlessly. The date 1998.07.01 also sparked the interest of fans for its various and personal meanings for the group. Get lost in the good ol’ days with their sexy fun summer MV!

Now, as the members still practice and continue to perform as a group, member KOM (the maknae and younger brother of oldest member J.K) released his solo-single song “ADRENALINE” on January 12th. The dance MV is, as fans pointed out, of high quality as the set, costumes, and camera work shows the group is continuing to grow and putting more effort into their visual aesthetics. As expected, member KOM is showcasing his fit physique with a skin-tight white high-rise crop top, fully accented with a fitted orange leather jacket and black suspenders. The youngest member is known for showing off his chest and considers it his most favorite body part – and with reason, as his body looks like a character from an anime like ‘Jo Jo’s Bizarre Adventure!’ Perhaps he is on par with ex-Monsta X member Wonho? See for yourself!

Although he isn’t sporting high heels this time around, the rhymic dance track “ADRENALINE” has a hypnotic melody and shows off KOM’s warm, sultry vocals. The song is the first solo single for the group and keeps fans curious as the unique ending seems to be teasing to the appearance of the other members as two dark figures dressed in black sporting high heels appear and strike a pose similar to the ending of their performances for “I’m Not, But.” Fans wondered if this is a sign for another future release!

What did you think of KOM’s debut and this interesting new track? Stay tuned for more updates!