It isn’t a surprise anymore – K-Pop is big and continues to excel in the states! Where boundaries were once set a few years ago, recent groups have broken through and solidified a reputable spot for K-Pop as a real musical force to be reckoned with.

With sensational acts such as Girls’ Generation and the Wonder Girls being some of the first to make waves and perform on live American television, these broadcasts are looking for K-Pop idols left in right! BLACK PINK already won over the hearts of millions of viewers as they performed their hit single “Ddu-du Ddu-du” for their live New York City audience in the Good Morning America studio back in early March of this year (2019).

The talented rappers and performers of NCT 127 are now the next to follow in their footsteps as they will prepare to dominate the set next Thursday, April 18th! Many fans are highly anticipating the group and expect them to do much better than BLACK PINK, due to the group’s large number of member’s and NCT 127 being a popular performance group. Be sure to mark your calendars and tune in for their performance from 7 am – 9 am EST. 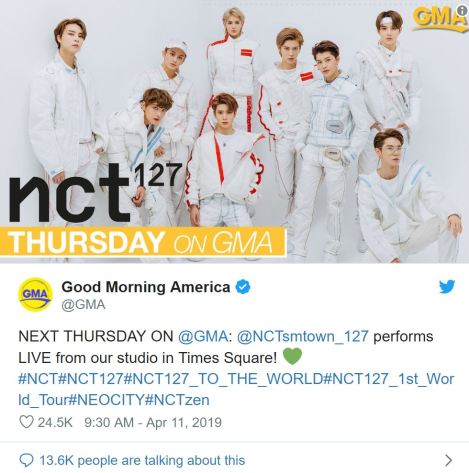