Recently, the biggest craze in Korea that everyone can’t stop talking about is Pokémon Bread! The delectable snack is selling like hotcakes (literally) and is nowhere to be found in Korea. Even the members of BTS and other K-Pop idols are begging for them!

Back in 1998 when Pokémon was first released and aired as an anime, the craze for the lovable and cool creatures was a worldwide infatuation – but some countries in Asia were lucky enough to have more than monsters to capture, they even had Pokémon bread! The bread comes in over 7 delicious flavors, mostly consisting of chocolate, cheesecake, sugary flavors, and even… hot sauce bread? Yes, Hot sauce bread (I tried it, thankfully it is just pizza-flavored but hella spicy!).

While the delicious and probably not-so-nutritious bread were flying off the shelves in 2003, they became discontinued. However, after word got out that the CEO was planning on re-releasing the collectible bread, their comeback was received well by older and younger generations alike. Now, there is a shortage of the bread being sold in stores, online, and fans are even waiting outside stores for hours just for a chance to grab a roll or two. Some people even bribe the store owners or friends whose parents run convenience stores to smuggle them one! Online, the bread even resells for double and sometimes triple the price.

With so much hype and attention surrounding the product and being referred to as the “second Honey Butter Chip trend,” even idols are getting involved in this Pikachu Pandemic and posting their bread victoriously on SNS. Sensational boy group BTS are no exception and leader RM was seen begging the stores to sell more Pokémon bread! Shockingly, they had nothing to do with the mass-spread trend! 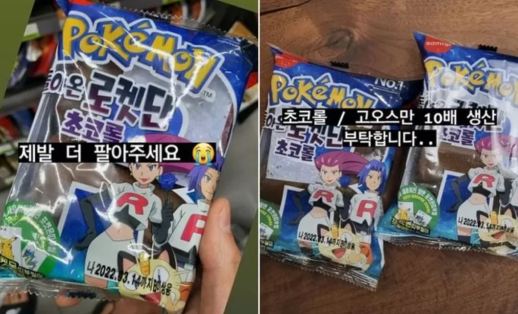 The K-Pop leader posted the picture above and admitted he went to over 8 convenience stores just to try and find the bread. But what makes this bread so popular?

With the Team Rocket Chocolate Roll (shown above), Gastly Chocolate Cake, and Pikachu’s Moist (sorry^^’) Cheesecake being the most popular flavors in that order, there is another part of the bread that makes it more popular! The collectible and REUSABLE stickers! In every bread, there is an exclusive Pokémon sticker of the original 151 available. They can be reused even after being applied on surfaces.

People are scouring the stores in search of the stickers deemed most valuable: Pikachu, Mew, Mewtwo, Squirtle, Bulbasaur, Charmander, and Jigglypuff.

How To Dress Like A K-Pop Idol: BTS V’s Louis Vuitton Sold-out Look

Side note: I, myself, have spent a few nights in front of stores and trailing down each corner store, block after block, in hopes a Pokémon bread would appear! I have successfully found many, including a Pikachu sticker that I am thrilled with and posted on SNS.

Although the bread has been made available for over a month now, its increase in sales is still not to be believed. Stores are running out (as they usually only receive 2-4 pieces a day, morning and night), online shipping centers are flooded with orders and some store owners are posting signs of Professor OAK on their doors that read, “NO Pokémon Bread” or “SOLD OUT!”

What do you think of this wild new trend in Korea? Have you ever tried Pokémon bread or want to try it for yourself? If you’re lucky, maybe you can get a chance to come to Korea and try it out for yourself! Share in the comments which flavor you would like to try and share this trendy article with your Korean friends~

2 thoughts on “What Is Pokémon Bread & Why Does BTS RM Love It?”