It’s a mad world right now and quarantine seems to be the only solution to the problem – yet it is making us madder? Guess the same goes for these idols who couldn’t resist the temptation of celebrating too early and broke Korea’s quarantine regulations. 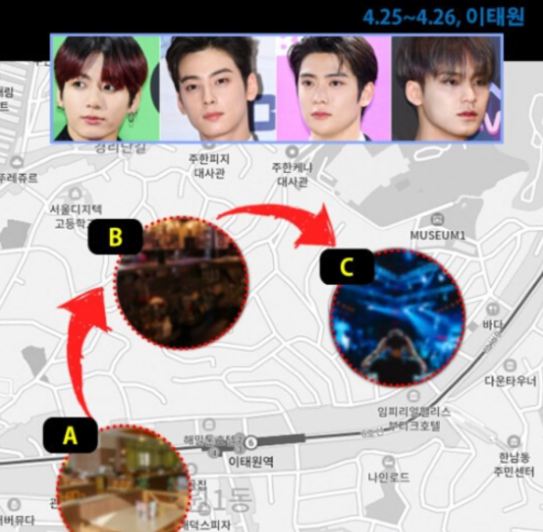 Korea was one of the first countries to encounter a second wave due to the horrible news of an asymptomatic Korean club-goer who infected over 100+ people after a night of partying in the gay clubs of Korea. Soon after, an English instructor (whose identity remains hidden) lied and hid the truth about their whereabouts alongside their status condition and infected a school alongside a family through private tutoring.

Now, in order to keep things calm and regain composure of the great progress Korea had made so far, the government has taken extreme precautions to prevent further spread of the virus and track down those in the area between May 1st – May 5th. Among these people found, these idols were also caught being in Itaewon as well as breaking social-distancing protocols in other ways! Check out the list and (some) apologies down below.

NCT’s Jaehyun was seen partying in Itaewon alongside others. Despite social distance protocols put in place, the popular idol visited large crowded areas and events. His apology letter can be found below.

“Hello. This is Jaehyun.

I am sorry I caused discomfort to many people because of my behavior during this difficult time. I went to a restaurant and bar in Itaewon during the social distancing period, and am deeply reflecting upon my actions.

I’m sorry for disappointing the fans who support me because of my actions. I sincerely apologize to the members who have been harmed by me and the people who work with me. From now on, I will think and act carefully. I sincerely apologize once again towards those who are having a difficult time due to COVID-19 and to my fans.”

Alongside many other idols, BTS’ Jungkook was spotted in Itaewon frequenting a bar and some restaurants. While this was before the clubbing outbreak incident, it raised many red flags among celebrities and fans. View Big Hit’s official statement addressing the matter and apology below!

“First, we’d like to bring up how various media outlets had called us about whether Jungkook visited Itaewon or not last week, and how our handling of the situation was problematic.

It is true that Jungkook visited Itaewon. He did not go to the problematic place where the patient in early May had the confirmed case, and he went about a week beforehand. He followed the government regulations and voluntarily got checked for Covid-19, and we decided that it was not our place to interfere in his personal life.

However, we have no excuse that we placed the artist’s personal life before we were able to emphasize the importance of social distancing. We bow our heads in apology.

Jungkook visited the restaurant and bars with his friends on the night of April 25th. Afterward, he did not have a cough or a fever, and his results came out negative. He is also deeply regretting how he did not follow social distancing measures seriously.

Big Hit Entertainment is currently doing our best to follow Covid-19 prevention measures such as social distancing. We will work harder to make sure this does not happen again. We apologize for worrying many people, including fans.”

WINNER’s Song Min Ho was under fire due to the speculation that he was performing at a public guest house and private club in Gangwon-do on May 14th. However, it was believed to be a mistake on the public’s part as YG Entertainment confirmed the artist had vacationed with close friends and performed at a private gathering at a private residence in Yangyang county.

No updates had been released regarding his performances exact whereabouts and no consequences of statements have been exercised by Song Min Ho or from YG.

ASTRO’s Chae Eun Woo is another young idol who couldn’t resist the call of going out and having fun! Just like his fellow idols, he took to SNS and Twitter to leave a letter of apology together with his agency.

“Hello, this is Cha Eun Woo.

First, I apologize for causing concerns for so many people due to my careless actions.

During a time when there are still numerous healthcare workers and civilians fighting to overcome COVID19 together, for someone like me who even participated in the ‘Thanks Challenge’ to violate social distancing precautions and go out so complacently to a restaurant and bar in Itaewon with my acquaintances; it was wrong, and I am deeply reflecting on my actions.

I am sincerely apologetic toward so many people who have watched over me until now, and toward the fans who always trusted in me and cheered me on, for disappointing them. I am also sorry for my members, our company staff, and all of those around me. Many people have sent me their love which I cherish, and so I will work hard to become a person who can think and act as wisely. Once again, I apologize for causing anxiety and concerns.”

Seventeen’s Mingyu also surfaced as an idol who visited Itaewon’s club scene during the pandemic and social distancing policies. Despite being another idol who visited before the second wave and with test results coming up negative, Mingyu reflected on his actions and released an apology.

“Hello, this is Pledis Entertainment.

First, we apologize for causing concern to many because of the reports of Seventeen’s Mingyu visiting Itaewon. Mingyu is currently deeply reflecting on his wrong actions where he did not follow social distancing measures while they were in place.
He followed the government suggestions and voluntarily got tested for corona-19 even though he did not have a cough or a fever or any other corona-19 symptoms. He tested negative and has been staying at home and following personal hygiene measures strictly.

Our label takes responsibility for not properly managing our label artist. We sincerely apologize to the fans who always show us love and interest. Pledis Entertainment will re-emphasize how important social distancing and personal hygiene matters are to our artist.”

The lovely idol was spotted at the airport and traveling despite there being travel bans in effect. Although the idol could be posting a picture from the past, the time of update and schedules made fans speculate it was current. No statements or apologies were issued.

One of the most handsome and iconic figures of the K-Pop world came under fire on April 1st after making an April Fool’s joke of the entire pandemic. JaeJoong, in an attempt to “raise awareness,” posted a photo with a caption of how the K-Pop idol tested positive for Coronavirus. Despite it being a “joke” and actually observing social-distancing, not going to clubs as he falsely states, fans were outraged and immediately questioned why he would joke about such an emotionally triggering thing.

JaeJoong apologized and has since then taken down the post. Despite being known for his pranks towards fans, it seemed this was one joke that couldn’t make a clown laugh.

What did you think of this surprising list of rule-breaking idols? If you heard of any other idols breaking quarantine, feel free to share them in the comments down below! Remember everyone, it is OK to go outside your home for fresh air but STAY SAFE! Avoid crowded areas at all times.